skip to main | skip to sidebar

No pictures today. I've been lazy. Well, not really. I've been trying to get my socks for this two-week period finished. As was discussed before, I knitted past the heel before I realized that I had made a major mistake above the heel. It was frogged and reknitted, and I finished the first sock yesterday. The second one was cast on.

I'm looking into some other KAL's for when this one is over. I've really had fun, especially happy to see everyone's socks that have been posted on Ravelry. I've found several patterns that I want to try.

A quick funny story about Bunny. Our son brought his current girlfriend over to "meet the parents" over the weekend. Bunny always follows him around, goes where he goes, is his little shadow when he is here. He brought J in and sat down by her. It really ticked Bunny off. She turned her back on him and stomped out of the room! It was sooo funny. She wouldn't let him touch her, she wouldn't go outside with him, she wouldn't eat treats from him, she was jealous! We laughed and laughed. Next time J came back Bunny wasn't quite so mad.

Well, back to the knitting. I'm determined to finish this sock by next Friday.
Posted by She Knits Socks at 3:51 PM

Bunny was definitely jealous. How cute!

You have until September 1 to finish that second sock. No worries. They are a beautiful cable pattern and I can't wait to see them done. Unless, are you planning to make one more pair before the end of SOS?

Holey Moley! You really do knit socks! You are prolific and very talented!

Thanks for visiting my site. And yes, I'm so glad everyone has an Aunt Honey or two. Actually the honeys in my family have an even worse sister. She doesn't call anyone honey-no sugar coating a thing for that evil aunt.

I have to tell you that I have been exploring your projects page on rav and I love your SOS08 pair #2. Beautiful!

Jealous dogs - gotta love them. Murphy always hated Paco with a passion. Ignored Skeeter, ignored Brandi and Rhett, but would go after Paco in a heartbeat. She know the big girl was special. It was also a case of a chihuahua going after an 80 pound rott mix. Who would just look at her and blink like "What the heck are you???"

Isn't it funny how we put ourselves to so many deadlines for the sake of our knitting art...I'm even adding stress to my projects by wanting to finish them all yesterday;)
Thanks for the comments on my blog. I'm new to all of this but in just two months, have added yet another blog via my new website--which isn't ready yet--and am still trying to learn how to do all sorts of new things on the computer.
Am also a teacher, although still at work but as a substitute this year. I had a very difficult burn-out last year after 18yrs in the profession and it's been a good thing to move away from it some. Now I'm still multi-tasking but just throwing blogging, website design and managing into the picture. Love the fotos of your dogs. We're also fond of our little creatures, well, they're not so little. I posted some snap shots of Buster and Bunny's distant relatives on my blog--it was one of the first postings under "meet the Fergusons."
So glad to have 'met' you here in cyberspace and shall stay posted for them sox--I've not yet made any myself but am hoping to learn how to before Xmas. Renee 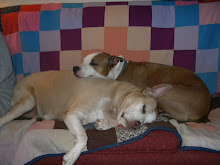